The Rise of Decorative Concrete and the Case for Micro-Toppings

Although it is one of the most widely used building materials in the world, plain gray concrete just never really caught on as a design favorite. Decorative concrete, however, has fast become one of the most popular design elements in the construction industry today. With concrete surfaces already under a vast amount of retail and residential spaces, and with new innovations utilizing concrete for everything from countertops to wall coverings, people are waking up to the idea of concrete as a finished floor surface. The materials and labor to create a decorative concrete floor might not be the cheapest way to go, but with unlimited design options for personalization and a durability that is unmatched in other flooring materials, it is more often looked at as an investment as well as an aesthetic upgrade.

When the warehouse shopping boom came along it was all about the deal. Huge metal shelving units replaced nice display racks and polished slab concrete became the floor of choice. It didn’t take long for grocery stores to follow suit. In order to portray a more upscale image, they added color, and started staining and polishing the concrete under their existing floor coverings. The initial investment was well worth it. The concrete floors offered lower maintenance costs and an indefinite lifespan versus VCT floor tiles that with care, might last eight to ten years.

Consumers were suddenly being inundated with concrete floors and the market expanded. The stained concrete floor in the local Starbucks, became the look wanted in basements, kitchens, and living rooms around the world. People began removing their existing floor coverings, with hopes of turning their concrete into decorative masterpieces. Unlike the floor at Starbucks, that in most cases, was stained and polished just after the concrete cured, homeowners were having their 30 year old basement floors stained after pulling up the tile or carpet. Often this resulted in disaster. Grout lines from the tile would appear or ‘ghost’ through the new finish. Some long forgotten chemical spill during construction would react with the stain and reappear. Or cracks and the holes from carpet tack strip that were filled would take the stain differently and suddenly stand out. Glues and adhesives from previous floor coverings, as well as efflorescence from moisture in the concrete could also cause problems in the finish.  Older slabs became a gamble that caused even the most experienced installers hesitation.

Manufacturers have been constantly improving concrete resurfacing products and the concrete overlay formula was modified into a ‘micro-topping’ to provide a thin new layer of fine concrete material that could then be stained or dyed like a blank canvas, hiding all the problems of an old concrete slab. These products were developed to bond tenaciously with a properly prepared surface, while providing a smooth top coat that could be made to look like polished concrete. They offer all the benefits a concrete floor has to offer, without the surprises that often came with finishing older slabs. Installers could now produce color samples knowing the same color could be achieved on a particular floor. Gone were the days of contractors saying, ‘Hopefully your floor will look something like this….maybe.’

Micro-toppings also added more design elements, and customization. Because they could be made with white cement, it was now possible to achieve more vivid colors than could ever have been produced with stains and dyes on gray concrete. Multiple colors could be troweled on to mimic the looks of Italian plaster. Stencils could be used to create accents never before possible and just like any other concrete floor, they could be saw cut or engraved. Micro-toppings have even been created that can be sprayed on allowing large areas to be resurfaced quickly and cost effectively.

Tenant improvements to retail spaces would often involve cutting trenches in the existing concrete to relocate utilities. These cut up slabs never used to be candidates for decorative concrete flooring, as there was no way to hide the utility trenches once they were filled back in. Now a micro-topping can be applied to match the new décor while providing a durable flooring choice for a high traffic environment that typically costs less than installing tile.

A decorative finish is now obtainable on almost any concrete slab despite its flaws. If you have been considering decorative concrete, but have been worried about the condition of your concrete, contact us for more information on micro-toppings and other resurfacing options.

For Your Next Project….Follow Your Gut

How To Stencil A Concrete Floor 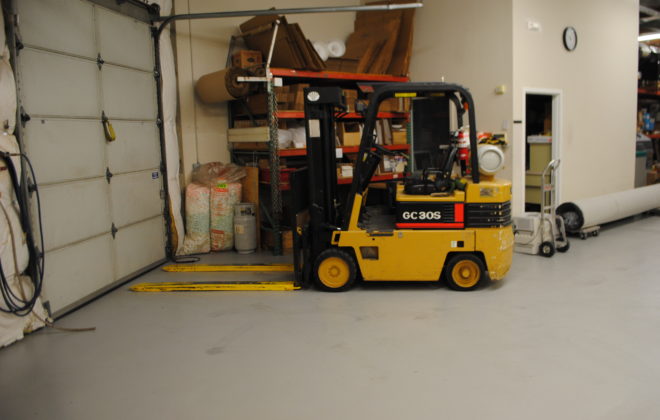 How to Choose the Best Flooring for Your Loading Dock